Since posting the 2018 Carnegie Council Student Essay Contest, there have been a number of requests for me to send my winning entry from the 2014 edition. For clarity, the prize is Joint-2nd prize reflects the fact that two entrants (Another student and I) tied for the top position.

My entry is reproduced below, unedited, for the reading pleasure and learning of other entrants and the rest of us. There will be links to other winning entries at the end of this post.

What’s Needed Is the Emergence of a New Mind-Set

Today, Northern Nigeria is torn apart by violence, from the organized campaign of mayhem and destruction being perpetrated by Boko Haram, to the spontaneous riots that occur on what seems, unfortunately, to be a regular basis. I experienced one such riot some years ago, when my family and I had to huddle in hiding overnight while wanton mayhem went on outside. When people in the south, where I now live, attribute bad character to those in the north, I take it as a duty to inform them that once, a northerner sheltered my family, at great risk to her own family and herself. What this experience taught me is that there are good people and there are bad people, but nowhere can one find a good people, or a bad people. Prejudice (and its attendant mistrust and hatred) is one of the major ingredients of the strife and violence that one gets to see in the news, every day. The emergence of a new mind-set is what I’d love the most to see in 2015. Regardless of the variances in our sexes, races; tribes or religions, we are first and foremost human beings, and this our shared humanity ought to be the most important thing, above any other factor.

At the international level, we have seen heinous crimes committed against another race or nationality on the single basis that they are “different,” and although diverse reasons usually given to legitimize those actions, this “difference” has always been at the core. The massacres, genocides, and wars that ravaged the globe during the past century were very often the consequence of nations’ inability to shift ground and come to a compromise when disputes arise. Sometimes too, these events were the actions of dictatorial governments with a disregard for human rights. There is a need for governments to come to the realization that their citizens have the same basic needs as the citizens in other countries, and that engaging in warfare results in disastrous loss of life and destruction of property, as well as deprivation of these basic needs for their own citizens as well as the enemy’s, and that it is simply not worth it, even if they win. Within this century, the strengthening of international cooperation, accords, and existing organizations will go a long way in enabling governments to dialogue and find mutually satisfying solutions, as well as restrain governments when they begin to take actions inimical to global peace and harmony.

In the past century, we witnessed a boom in the number of non-governmental organizations working for laudable causes such as human rights, poverty alleviation, and literacy. As awesome as this is, there is a need in this century for there to be another boom, an increase in the number of NGOs such that most, if not all, people are part of one, where they have an opportunity to put their peculiar skills to work to help the cause of mankind, starting from their immediate environs. A young friend of mine convened a cosmopolitan organization of youth working towards change in the quality of leadership in the country, and when I got to know the strides that had been taken by the organization in various areas, I realized that few things will shape this century more than young people standing up for what is right, and more importantly, working for what is right. One of the most common refrains in Nigerian educational institutions is “Youth are the leaders of tomorrow.” I disagree. Youth ought to be the leaders of today, even if they do not occupy the top positions in government; they have the numbers and energy to effect positive change in society. The legal aid clinic in my faculty provides free legal advice and representation to indigent people, who otherwise would be at the mercy of the country’s muddled justice system. The number of wrongly convicted people that the clinic has gotten freed over the years is a testament to what determined young people can achieve, and what can be achieved over this century.

Unfortunately, as the number of NGOs experienced a boom, so did the number of terrorist organizations around the world. These organizations usually have their basis in religious, racial, and ethnic fundamentalist beliefs, and they contributed a substantial part to the strife that characterized the past century. I think that the only real way to neutralize this threat is for the leaders of the various religions or sects that these organizations use as cover for their heinous activities to step up and ostracize them, letting the world know in no uncertain terms that their activities are not in tandem with the faith. Although there has been criticism along these lines from various faith leaders, it has, more often than not, been of a lukewarm, conciliatory nature, and emanating from the minority. This makes it easy for the criticisms to be disregarded as spurious, and end up not having any impact on the numbers of people who go to join these terrorist organizations, in the belief that they are following God’s injunctions. Faith leaders must come together in such numbers and of such reputations as to make their pronouncements incontrovertible, and make their followers understand that no God would ask his followers to go about in wanton destruction of their neighbors, to please him.

Individually is where the most work needs to be done. We must each work to remove the labels that we have imbibed over the years. Black does not equal gangster; Muslim does not equal terrorist; and Nigerian does not equal scammer. Not only are these stereotypes very unfair and illogical, they are also, for the most part, quite stupid. The reason why otherwise reasonable people would accept these obviously senseless notions is not far-fetched and it is simply because there is a lack of communication and interaction between people of different heritage, and more often than not, all the knowledge we have of another people different from ours is what we have been fed by the media.

This century, the revolution has started from normal consumption of information to what one scholar called “prosuming,” where all of us participate in the production and consumption of information. Over this century, it is my earnest hope that this “share-culture” continues, giving us a world whereby people everywhere are able to interact with people whom social influences would have prevented them from interacting with before, and culminating in a global realization that: “he’s just like me” and “we’re not that much different,” making it impossible for people to be whipped into a frenzy of violence by leaders with ill motives, on the pretense of some perceived difference.

“Hate must be eliminated. We have to change hate to love.” These succinct but very poignant words spoken by Hawa Abdi perfectly state what I think would be the best thing to happen to this world in this century, enabling us have a world where our only enemies are things like natural disasters and never one another. Where we would be aware of our differences, but more conscious of our foremost similarity: our humanity. So that when the curtain falls on this century, we can all take a bow together, smile and say, “We have done well, we have done well together.”

Winning entries for the high school category can be found here. 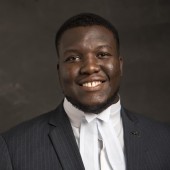 Get The Latest Updates

Get The Latest Updates

Have you ever missed a competition deadline?

Or are you looking to improve your writing?

Join 3000 other writers to get essay competitions, writing tips and freelancing guides right in your inbox!

You have Successfully Subscribed!